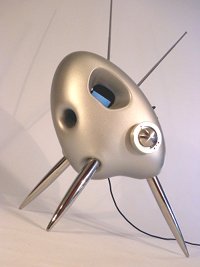 In the future age of discards, an offspring of the chemopolyplastitic electrodynamic mating between an abandoned Astor Television set, a brand of television set that once sold in Australia, and a childs discarded ‘Mr Potato Head’ toy infused with the carcinogenic spirit of plastic has resulted in the emergence of a sentient television creature .  .  . the AstorBug!

Able to seek out new frequencies and new television Stations the AstorBug is an Electroentomorph (C)* that has an indomitable voltage driven by the perpetual electron wishing to be converted into a colourful bunch of photons, along with a little sound! AstorBug has appeared at Experimenta House of Tomorrow Exhibition at the Black Box Theater, Melbourne Arts Centre September 3rd to October 4, 2003.

Astorbug is an Electroentomorphic© Machine Creature and Television device that can receive Analog UHF television signals between channels 21 to 69 as well as receive a video line input. It has TV scanning buttons on its back and an optometric lens over its eye/screen.

In this view you can see the Optometric Screen, this is the TV screen where you can see whatever you are playing on the DVD that can be connected to the ‘Bug. The hole is the sound outlet port.